How Do You Manage Your Network and Identify How to Build It?

Networks are not measured just in numbers. You can only truly assess the strength of your network if you look at the diversity within it, the depth of your relationships with people to whom you are connected and, perhaps most importantly, whether your network can offer you the support and help you need when you most need it.

When I teach referral strategy I ask people to score their ‘Champions’, the people who can potentially refer them, on three factors.

Willingness to refer / trust – This is where the depth of your relationship comes in and their belief in you as an individual and in the brand, product or service you represent.

Understanding – How readily would they recognise an opportunity for you and know how to respond?

Opportunity – Are they talking to the right people and do they carry credibility into those conversations?

It’s not enough to connect with as many people as possible, nor to focus on building deeper relationships just with the people with whom you are most comfortable. If you are to fully embrace networking as a strategy to help you to develop your career or grow your business, the make up of your network has to be a central consideration.

When we picture a network it’s easy to visualise a flat entity, a single structure comprising all of the people we know. Much network theory focuses on the number of people in the average network, with classic studies such as Girard’s Law of 250 and The Dunbar Number often quoted.

In my opinion, both of these studies are flawed. They are flawed in their interpretation; The Dunbar Number was never intended as an indication of average network size. They are outdated; they were both developed in the last century, well before social media dominated our lives and networks. And flawed in basic premise; Girard’s Law is based on the observation that the average number of guests at a wedding or funeral is five hundred. I went to a funeral recently that was described as ‘busy’ and I can promise you that nowhere near five hundred people attended.

The way both studies have been used in network theory is the biggest flaw. We have been told that ‘the average network size is two hundred and fifty’ (based on Girard’s Law). Other objections aside, this oversimplifies the nature of a network.

Rather than being a flat structure or simple grouping of contacts, networks are more complicated organisms with people flowing in and out and between various levels. I tend to visualise a network as a group of expanding circles, much like the side section of half an onion (figure 1). 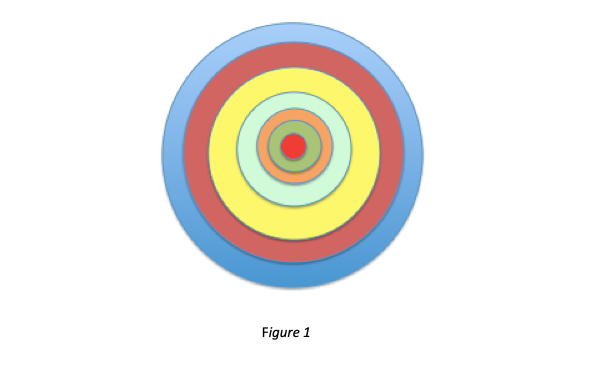 Towards the centre of the network are your close friends and close family. What we’d call your trusted network, the people you see day in day out, week in and week out.

As you move further out through the layers, the relationship becomes a little bit less trusted, not as deep. You might see each other less frequently, be less inclined to share openly with each other or ask for help (figure 2).

At the outer edges of your network are people who come in and out. If we meet at an event or dinner party I’ll be in your network for a few days. By that, I mean that if we bump into each other or I call you, you will remember me and know who I am. But that link is tenuous. After a few days or weeks we will probably be strangers again.

Compare this to someone in the centre of your network. You could probably go three years or more without speaking to each other but still pick up where you left off as if no time had passed.

People on the outskirts of your network will come in and out. If you want to embed people in your network, your first challenge is to get beyond that outer circle and into their long-term memory (Figure 3).

The first month is key to embedding people in your network. Follow up within twenty-four hours of meeting someone; it’s not dating, so focus on being seen to be reliable rather than worrying about being considered desperate! Then follow up again after a week, perhaps a personalised LinkedIn request and again after a month, meet for coffee.

Then you will have moved up a level in each other’s networks.

An exercise that I’ve been using more and more in workshops over the last year or two is asking people to map their networks. It feels like a huge task, writing down the names of all of the people we come across, but a number of people have found it to be tremendously valuable.

It’s only when you can see your network in writing that you can really recognise where connections can be made, support resourced and gaps plugged.

I use a mindmapping programme on my computer to map my network. It allows me to continually add to the map, reorganise relationships and highlight different connections. I start by selecting different categories, such as friends, family, social contacts, clients, suppliers and so on.

The more specific the category, the better. I will have a group for my friends from football and another for the friends I go to concerts with, rather than one group for my social network. That way I will think of people on the periphery of that network who I might not have remembered otherwise.

I then add names by how strong our relationship is. Effectively populating the circles of the network diagram above for each category of network.

I can then start to highlight people and group them by similar interests, background, expertise or other categories. I can start to ask myself what those people do for a living and who else they know. Soon I have a map not just of my network but of my second-degree network (who they know) and a resource that points me to the expertise I need in a heartbeat.

My Network Map also helps me to see where the gaps are in my network. I can see at a glance whether I’m lacking connections and strong relationships with people who have experience in certain areas or who are influential in others. I can see how diverse or otherwise my network is; do I have enough variety in terms of age, background, sector or seniority? Will my network provide enough of a challenge to my own presumptions or will it act as an echo chamber?

That knowledge can help to guide me as I seek to build my network, whether that is through going to events or through introductions from people I already know. It’s natural to look for people who have a clear or potential relevance to what you do or who you want to meet but I’m also looking for people who have influence in the communities I want to work with, with whom I have a rapport and who share values, interests or experiences with me.

As you network grows you’ll naturally want to be more selective and careful with your time. That time becomes increasingly better focused on deepening exiting relationships rather than constantly seeking to expand randomly by meeting new people. Moving people through those stages of relationship can be far more important than just growing your network.

But always challenge yourself to make sure that the balance is right and the support you need lies deep within your network, whatever it might be.

Receive the best content weekly, straight into your inbox.